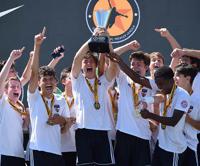 AURORA, Colo. | The inaugural Elite National Premier League (ENPL) season came to a dramatic close Saturday during the 2018 ENPL National Finals at Aurora Sports Park, awarding four clubs with four national titles in the 14-U through 17-U boys age groups.

It symbolized the end of the first year of a collaboration between US Club Soccer and the Elite Clubs National League (ECNL), which has effectively elevated the youth boys soccer landscape and provided top competition, development and identification opportunities to 16 qualifying NPLs and Boys ECNL Conferences throughout the country.

In total, 16 teams competed at the 2018 ENPL National Finals in Colorado. The diverse group of national semifinalists advanced to this event by securing top two finishes in the ENPL Eastern and Western Playoffs, held two weeks ago in Massachusetts and San Diego, respectively. While the 14-U through 17-U age groups played in a challenging two-stage postseason pathway, the 19-U ENPL National Finals champion – Ohio Premier SC – was determined after a single-stage final held alongside the postseason events in Massachusetts.

“National tournaments are always exciting, but this was even more special than other championships we’ve hosted in the past,” said Leo Garcia, NPL General Manager and US Club Soccer Vice President of Competitions. “The first year of the ENPL lived up to the hype, and you can see the scores and understand just how competitive it was in every division on both days. We wish a special congratulations to not only all the participating teams in the ENPL National Finals, but also to all the qualifying competitions around the country that worked tirelessly together to make this possible.”

On Friday, July 13, ENPL National Finals participants played the semifinal round in what consisted of eight tightly contested games. Six of those games were decided by two goals or fewer.

On Saturday, July 14, the competition intensified. Six of eight games – championship and third place – were decided by one goal. Here are the results for each age group on Saturday:

All ENPL National Finals games were live streamed and are archived for a limited time on the ENPL website:

The ENPL National Finals provided an ideal environment for college coaches to scout for potential additions to their programs. College coaches dotted the fields at Aurora Sports Park, especially at the 16-U and 17-U matches.

The ENPL National Finals was held alongside the 2018 Girls NPL Finals, which takes place July 12-16 at Aurora Sports Park. For ongoing coverage of the 13-U through 19-U girls teams that are also pursuing national titles, please visit nationalpremierleagues.com.