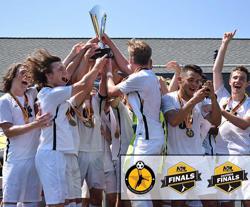 This is the inaugural season of the Elite National Premier League (ENPL). The postseason pathway stems from a collaboration between US Club Soccer and the ECNL to elevate the youth soccer landscape among 14-U through 19-U boys age groups. Sixteen qualifying competitions – made up of NPLs and Boys ECNL Conferences – throughout the country are focused on winning their regular season competitions and advancing to the ENPL postseason, where national championships are awarded.

“I can't put my finger on it, but it does feel different,” said Kevin Payne, US Club Soccer CEO/Executive Director. “I think part of it is that we have the right teams playing at the right level. In the past, sometimes you had teams that were at a much higher level playing against teams that were not quite at that level, and those games weren't as good. But, by bifurcating it and having an ENPL division and an NPL division, the games in both are better. The competition level is more equal. We think we've really hit on something, and we're going to continue to work to make it better.”

The 19-U ENPL National Finals was arguably the fiercest in terms of top-to-bottom strength of schedule, geographical diversity and mounting pressure with a national title up for grabs among 16 teams. Ohio Premier SC (Boys ECNL Midwest Conference) triumphed over the field, winning all five of its games by a margin of only seven total goals. “We were blown away,” said Ohio Premier SC coach Travis Wall when asked about the NPL and Boys ECNL opponents his team faced. “It was really competitive. The teams here made it very difficult for us. It was a grind.”

The Eastern ENPL Playoffs, meanwhile, also concluded on July 3, but for those 14-U through 17-U teams, the ultimate prize in Massachusetts was to finish in the top two of their respective age groups and claim a spot at the ENPL National Finals, July 13-14 in Aurora, Colo., where 16 total teams (eight from Massachusetts and eight from the Western ENPL Playoffs in San Diego) will compete for ENPL national championships.

The complete alphabetical list of qualified teams to the ENPL National Finals in Colorado is as follows, with Eastern ENPL Playoffs competitors highlighted with asterisks:

The Eastern ENPL Playoffs was an optimal tournament for college coaches to scout for potential additions to their programs. College coaches peppered the sidelines at Progin Park, particularly for games in the older age groups, featuring “many college-ready athletes.”

After the ENPL, the next tier of competition at the same venue took place: the Boys Eastern NPL Finals. The complete alphabetical list of 2018 Boys NPL Finals champions is as follows, including the winners from the corresponding Boys Western NPL Finals in San Diego:

In a show of parity, only one league grabbed more than one NPL championship: the Central States NPL, led by Lou Fusz SC. There is no advancement for these winners beyond their respective Eastern or Western NPL Finals.

A full recap of the ENPL Western Playoffs and Boys Western NPL Finals will be available soon on elitenationalpremierleague.com.

A National Association member of the U.S. Soccer Federation, US Club Soccer fosters the growth and development of soccer clubs in order to create the best possible development environment for players of all ages.